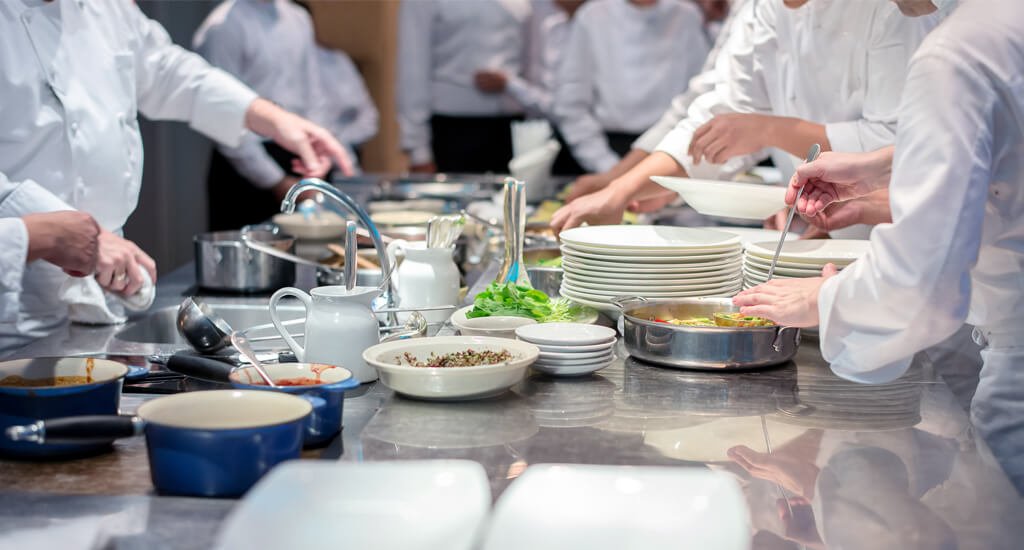 The Surprising History of Chefs’ Uniforms

We might take chef’s uniforms for granted in today’s world but they have a surprisingly rich history. Not only were they used for protection but they were also developed to indicate experience and rank in the kitchen, as well as to demonstrate the cleanliness of the chef and their craft. From the number of folds in the chef’s hat to the pockets added to their aprons, here’s how the three core elements of a chef’s uniform developed over time:

The ‘toque blanche’ is a white hat synonymous with chefs across the western world. This element of the chef’s uniform has the longest-standing tradition in the field. The hat originated in France in the thirteenth century, then it was adopted in England in the fifteenth century and saw a revival in the 1930s.

Different heights were used to indicate different ranks in the kitchen with taller hats being given to the more experienced head chefs and sous chefs. In some kitchens, the number of pleats mirrored the chef’s expertise, with each fold demonstrating mastery in a particular culinary skill.

The traditional chef’s uniform we see today was created and popularised by a popular French chef called Marie-Antoine Carême in the mid-nineteenth century. The thick cotton jacket was used to protect the chef from heat and splashing liquids and the double-fold and non-metallic buttons were adopted for extra safety. White was chosen as a way to praise and honour the chef’s cleanliness in their craft.

Nowadays, chef jackets can come in a variety of colours, with black versions increasing in popularity. To remove the worry about cleanliness, there are super convenient linen companies like us here at London Linen, who can hire out and wash uniforms for restaurants, hotels and bars alike.

Chef aprons increased in popularity primarily for their health and safety benefits. Not only did they provide an extra layer against burns and hot liquids but they could also be quickly removed should get caught alight. They were originally used as a handy cloth for the chef to wipe and dry their hands on. This practice fell out of fashion and they were instead used to protect the chef from getting too many stains and smells on their uniforms.

In some kitchens, embellishments were added to indicate rank or responsibilities in the kitchen. Some even used pockets to carry various kitchen tools. To this day, we at London Linen can add various logos and stitched name tags to our aprons for the same effect, but in more of a tailored and professional-looking manner.

Here at London Linen, our services have changed the way hospitality businesses operate. Our sustainable linen hire and washing operations have helped to streamline the industry and gain our clients a competitive advantage. If you have any questions about how we can contribute to your business, don’t hesitate to get in touch by calling us on 020 8574 5569 today!